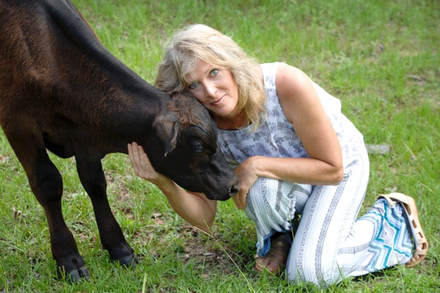 Full Circle Farm Sanctuary started in 2010 as the passion of long-time animal rights advocate Kayla Rae Worden. After spending years advocating for animals in organizations like PETA and Mercy for Animals and promoting veganism since she herself went vegan in 1989, Kayla had the opportunity to adopt Penny, a pig, Zephyr, a goat, and Noah, a rooster, which then led to another and another rescued farmed animal. She was living on two hilly acres of land outside Asheville, NC and decided to create a sanctuary. She recruited fellow animal rights activists and other dedicated volunteers, and they established Full Circle Farm Sanctuary in 2010, and then as a 501c3 in 2014.

Over a six-year period the sanctuary became home to more than 40 animals, and it became apparent they were in dire need of more space. Kayla secured funding from a generous donor and she, along with her dedicated board members, acquired a former horse ranch with 50 acres in Warm Springs, Georgia to expand the sanctuary.

After months of construction, renovations, and relocation of the animals, Full Circle Farm Sanctuary officially opened its doors to visitors in late Spring of 2016. Kayla, along with board members and volunteers, worked countless hours to ensure that the new land in Georgia was a fully-equipped home for all the animals.

With the expanded space in Georgia, it didn’t take long to acquire many more animals in dire need of a home to live out their lives free from exploitation. As of 2020, Full Circle Farm Sanctuary is the home to more than 150 animals who are surrounded by a group of staff and volunteers who love and care for them on a daily basis. Additionally, Full Circle has become a beacon of education around animal issues with regular tours and events with the goal being to awaken people’s compassion toward animals and the importance of adopting a vegan lifestyle for the animals, health, and the planet.
​
Kayla is continuing her animal rights activism by reaching many more people through speaking engagements, writing, social media and other endeavors devoted to promoting compassion for all feeling beings.